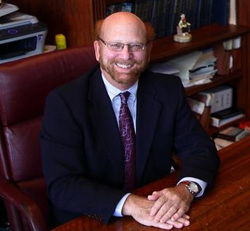 Biography
Richard B. Berman is the principal of the Law Offices of Richard B. Berman, P.A., whose firm specializes in Workers’ Compensation and whose practice is limited to representing injured workers. Mr. Berman received his Undergraduate Degree Cum Laude in Speech Communication from American University and his J.D. Degree from the University of Miami School of Law. He has been a member of the Florida Bar Workers’ Compensation Rules Committee, Broward County Legislative Task Force on Health Care and the Advisory Board of the Reflex Sympathetic Dystrophy Syndrome Association of Florida. Mr. Berman is on the Executive Council of the Workers’ Compensation Section of the Florida Bar. Mr. Berman is on the Board of Directors of Florida Workers’ Advocates, an organization whose focus is to fight for the rights of injured workers in the State of Florida, is Chairman of its Media Relations program and member of the sub-committee on insurance rates. Mr. Berman is affiliated with a number of other professional organizations, including the Broward County Justice Association, the American Association of Justice, American Bar Association, Florida Bar and the Washington D.C. Bar.   Mr. Berman is also a Member of the Workers’ Injury Law and Advocacy Group (WILG), the national organization of attorneys whose focus is to fight for the rights of injured workers.

Mr. Berman has been given an AV rating by Martindale-Hubbell, an honor accorded only two (2%) percent of attorneys nationwide, and has been elected to the Marquis Who’s Who in American Law, Who’s Who in Emerging Leaders in America, the National Register’s Who’s Who in Executives and Professionals, Strathmore’s Who’s Who, Continental’s Who’s Who, and Stanford’s Who’s Who. Mr. Berman is a frequent lecturer on various workers compensation topics around the state of Florida.

Mr. Berman represented the claimant, a teacher at Riverside Elementary School in Broward County for 18 years, who developed breathing problems and hives due to her chronic exposure to mold and mildew in her school. The School Board denied the claim in its entirety. Mr. Berman was successful in proving that his client was exposed to significant chronic mold and mildew throughout the entire school, caused by chronic significant water intrusion into the school. The school board continually refused to appropriately address the problem and intentionally concealed the ongoing problems. Mr. Berman was successful in obtaining sanctions against the school board for intentionally destroying hundreds of photographs depicting the mold, despite court orders to produce them, as well as all benefits due to his client.

A landmark case regarding the issue of employer provided transportation. Mr. Berman represented a construction worker who was driven to the job site every day by his boss. The claimant injured his knee in a car accident on the way to work. The work comp carrier denied the claim because he was not injured on the job site doing his actual job duties. The trial judge denied all benefits. The First District Court of Appeals and the Florida Supreme Court disagreed and reversed the Trial Court.

This was a case of first impression. Mr. Berman represented a young girl whose father was divorced from her mother, had remarried and had more children with his second wife. When his client’s father was killed in an on-the-job accident, the deceased’s second wife took all of the death benefits and excluded Mr. Berman’s client. He was successful in obtaining all of his client’s death benefits to which she had been entitled. Mr. Berman subsequently filed a petition to redistribute all of the benefits from the second wife to the children. After the petition was filed, the work comp carrier paid out all of the remaining benefits to the wife, divesting it of all benefits owed. Mr. Berman was successful in forcing the work comp carrier to redistribute all benefits from the second wife to the children, including his client, even though it had already previously paid out all of the benefits.

Claimant was a traveling salesman for an employer located in Florida who resided in Ohio and was injured in Indiana. The work comp carrier processed his claim under Indiana law and cut off all benefits, despite the fact that claimant sustained chronic post-traumatic seizures. Claimant was unable to find an attorney in Indiana, Ohio or Nevada, where the carrier claimed he was hired. Mr. Berman was successful in proving that claimant was, in fact, hired in Broward County, Florida and was therefore entitled to benefits under Florida law. Mr. Berman was also able to defeat the statute of limitations defense. Case is still pending regarding the benefits to which he is entitled.

Claimant injured his back in 1982, underwent surgery and eventually returned to work. By 1996 claimant could no longer work and ended up in a wheelchair. The workers’ compensation carrier ordered several home evaluations for home modifications pursuant to the recommendations of claimant’s authorized doctor due to the fact that claimant was wheelchair bound. After obtaining the evaluations, the carrier refused to authorize anything unless claimant agreed to undergo an independent medical evaluation, to which they were not entitled by law. When the IME doctor agreed with the authorized doctor’s recommendations, the carrier told claimant that it would not authorize anything unless he agreed to a second IME. Mr. Berman was successful in obtaining all home modifications and attendant care, past and future. Mr. Berman filed a third-party lawsuit against the worker’s comp carrier for intentional infliction of emotional distress and additional injuries sustained as a result of the carrier’s refusal to provide the home modifications.   This action resulted in a very large, confidential settlement.

Mr. Berman represented a claimant who developed end-stage liver disease as a result of multiple blood transfusions received during back surgeries in the 1970’s. The workers’ compensation carrier denied claimant’s liver condition and the necessary liver transplant. Mr. Berman was successful in obtaining an emergency trial based upon the claimant’s deteriorating condition and a ruling that claimant’s condition and transplant surgery were compensable.

Mr. Berman co-represented 200 former employees of a defunct airline for various medical conditions, such as heart disease, breathing problems, skin conditions and the like, resulting from chronic, repetitive exposure to excessive noise and other toxic fumes. Case settled for seven figures.

Mr. Berman represented a claimant who injured her back in the 1980’s. She continued with medical care authorized by the insurance company for 15 years. After she moved out of state, the carrier spent thousands of dollars on a doctor to say that her pain and continued need for treatment was no longer related to her original accident. When the carrier cut off all of her medical care, the claimant underwent low back fusion on her own. Mr. Berman was successful in getting all of her medical benefits and future care reinstated after a lengthy trial.

Following the first trial that Mr. Berman won regarding jurisdiction and claimant’s entitlement to benefits under Florida law, Mr. Berman was successful in getting the carrier to declare the claimant permanently totally disabled, pay him approximately $300,000.00 in past benefits, authorize all of his physicians and medical care, and pay him bi-weekly checks for the rest of his life.

Mr. Berman represented a gentleman who permanently injured his neck at work in 1987 when an aircraft cargo door fell on his head. The claimant utilized chiropractic care for twenty years without the use of narcotic medication and injections in order to continue to function and work. In 2009, over his client’s objections, the insurance adjuster cut off his chiropractic care and forced him to go to another doctor with whom they had already met. The insurance adjuster instructed the doctor to stop his client’s care altogether because they no longer wanted to continue to pay. Mr. Berman was successful in obtaining all of the adjuster’s records and log notes in order to prove that the company had continually engaged in an improper pattern of conduct by consistently attempting to cut off his client’s care in a concerted effort to force him to settle his case. After trial, the court reinstated his client’s chiropractic care permanently.

Claimant was a former firefighter Battalion Chief who sustained injuries in 2001 that eventually forced him to retire in 2006.  He underwent neck fusion and lumbar surgery. In 2011, ten years after the injury, claimant developed kidney pain that his authorized physician thought might be related to his pain medications. However, the workers’ compensation carrier refused to authorize a specialist to evaluate this condition. After meeting with the claimant, Mr. Berman determined that he had been entitled to permanent total disability benefits for the past five years and continuing, benefits of which the adjuster had  never informed him. Litigation ended with a substantial settlement of past and future benefits.

Mr. Berman represented a detective who became involved in a physical altercation with another police officer in the squad room. His client suffered a severely torn hamstring muscle and required emergency surgery. The city alleged that he client started the fight over political strife between the Fraternal Order of Police and the Police Benevolent Association and denied all benefits. Arbitrations took place for the officers regarding terminations, suspensions, back pay and procedural violations of their rights. The city also alleged that Mr. Berman’s client had used performance enhancing drugs that were the cause of his hamstring injury. Mr. Berman was successful in proving at trial and through cross-examination of the physicians that his client was the victim in the altercation and that he did not use performance enhancing drugs that may have contributed to his injury. The court granted Mr. Berman’s client all of his indemnity and medical benefits.